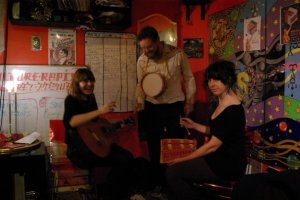 So many people! By 9.30 people couldn’t get in and had to stand outside – so if you want to get a seat, or even in the Cabaret Pop – get there for 8.30!
Ok, an impression of the night featuring some of the many people who did stuff: The photo is Hardcore Always, by the way, from left to right Erica, Colin & Dana. Colin complains that he doesn’t want to be “the music guy” and wants to read more stuff. Rufo says “Especially enjoyed the two plays, [Bev’s Atlanta Bus stand-off & Betrayal by shoes pieces – ed] ass rape (obviously), the black guy who sang and chanted and wailed (what’s his name?), and Troy’s lovelorn ramblings. There may have been good stuff afterwards too but that’s when I left.” Ass rape being Dana’s surprisingly fun song. Stedy was the guy chanting and wailing (& doing African-style guitar) to boulverser la verticalité du vend. Troy was in love once. In a seagreen linoleum booth at the Horseshoe Café. He claimed never to have done his stuff before, to have written his poem in 5 minutes having had to throw out a poem on the credit crunch because it didn’t fit the night’s theme, and to be only a painter. Well he did have paint on his overalls, but otherwise he’s a liar. He’s too good.
Pauline read a Mat Groening cartoon. Géno (where have all the other French poets gone?) said j’ai le coeur sec comme un pretzel, piqueté de grains de sel. Thomas Morelius brought meditations on Oscar Wilde. Thomas 2.0 went to the woods in search of summer love (I am really tempted to add some Grease lyrics at this point.) Becky’s birds have flown the nest. For Spiritchild, love is political. Sally is in love with a man I haven’t met yet. Elena saw the contradictions. Maxx brought the family, – yes that was his kid! – came in glory, end of story. Gave a Hail (to his) Marie, the only home I’ve known. Erika, backed by Betty on the box, spoke of 30 years with your love, a man who destablized the ship of me. Ellen Adams was late for sleep again. Gone is the day she saved me from the jellyfish swarm. I read Bitter Valentine, Carol Ann Duffy’s beautiful You (thanks Naomi for putting me onto her Rapture) and my own

She is the fountain,
on fire in spite of herself
the answer to a
question unasked.

Kevin? Kevin should’ve been a pair of ragged claws, scuttling across the floors of silent seas. (T.S. Eliot’s Lovesong of J. Alfred Prufrock). Hardcore Always did the Violent Femmes’ Add it up. (Why can’t I get just one kiss?/Maybe some things I wouldn’t miss/But a/look in your pants and a mere kiss/Why can’t I get just one screw? Baby I know what to do/but something won’t let me make/love to you).
And we also had Marianela’s moving piece, Erik, Antonio (in Spanish), Amber, Corty and others! Too many to fit in the bar, too many to write about!
Seeya tomorrow night!