Posted on March 16, 2013 by albertorigettini

Cristelle as Pastry-Chef, The two following poets decided to pay tribute to our special guest: Pansy Maurer Alvarez’s  wrote a sonnet, a response to “This Plot” by Alice Notley  from her collection In The Pines (Penguin, 2007).  Amy Hollowell re-upholstered “1992.” Thomas was able to make it in 22.5 seconds. Cristina Vezzaro’s love story (telling). Alberto’s moles and coins and fountains. Gabriel’s duo. Moe’s took us back in the good old days when he first met Alice Notley, our Featured Poet Tonight:

Alice Notley, a protagonist of the second generation of the New York school, has published over thirty books of poetry. She has received the American Academy of Arts and Letters Award, the Poetry Society of America’s Shelley Award, the Los Angeles Times Book Award for Poetry and she was a finalist for the Pulitzer Prize. Alice writes: “The first poem was Jack Would Speak Through The Imperfect Medium Of Alice. I read it from my book Grave of Light: New and Selected Poems 1976-2005. The other is the first half of a poem called I Went Down There, which is available in an online journal called Trickhouse.” (Click here)

Dareka goes multilingual before running back to the Downtown slam. Maryan Abdi is Isabella, Claudio’s sister in Measure for Measure: 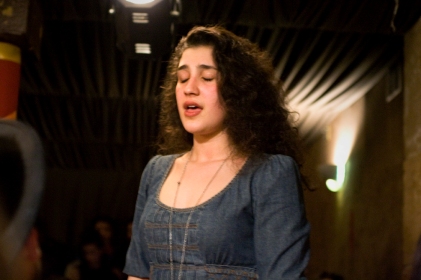 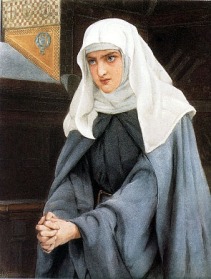 Devon’s crisis of roses upon us, David Barnes’s story about Jacko (He managed to eat an entire packet of Fisherman’s Friends!). David Sirois leads us through the land of Porcupines, sorry, through the great mystery of all time. And Sam, maybe inspired by Maryan, on his first attempt to write a Shakespearian Sonnet:

A Sonnet about Chimps by Sam Rossi-Harries

“Of all the animals in the zoo,

I know a cheeky little imp,

Who beats the others, through and through,

I’m talking, of course, of the glorious chimp.

Your boring hippos and giraffes,

Even the lion? Gimme a break,

The noble Chimp looks on laughs.

But keep one as a pet? No way.

Imagine him in my kitchen, wanking away,

Or in my bedroom, flinging shit.

Oh chimp! I bow before your grace,

but you come near my house and I’ll kick you in the face.”

Dan’s Mountain song closing part two. Victor leaving the French Music History for Calipso. But don’t worry he’ll be doing a  resume (one hour long!) here at the Chat Noir on Wednesday March 20! Carmen enters tonight’s sonnets competition. Wanda O’ Connor from Montreal: “Is struggle less honorable? Soon I’ll drink tea.” Pallavi crossing the border, will she be able to get back to the States? Evan after reading Moby Dick. Diego: “Armstrong is gone” (Neil or Lance). The accappella quartet Sara, Rebecka, Elsa and Kajsa introducing one of the most challenging themes of Spoken Word in April: Swedish Girls. Alex read two poems from the magazine Two Words For (He’s the editor in chief). Check it out. Jilann’s secret song and Helen’s sleep well Impro. It’s Over. For this Monday. Next Monday we’ll start earlier! Sign up from 7.30 pm! See you there! Theme: Navigation.