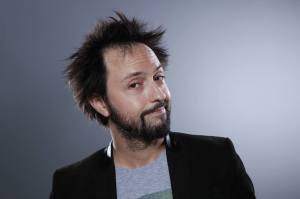 A former Mad Man (he was a copywriter for various french Ad agencies), David Azencot is now a stand up comedian and author. He has worked for french TV (Le Dezapping du Before sur Canal Plus, “En Famille” on M6, “Docteur CAC” on France 5) and is currently a radio host on Europe 1 with Anne Roumanoff.

His new show, “Flammable”, is about politics, terrorism, environment and mass extinction. So it’s kind of a hit with kids.He performs every wednesday in french at La Nouvelle Seine, which is a riverboat parked near Notre Dame, so you can’t really miss it.  He also performs regularly in english, though he tends to make puns no one understands.