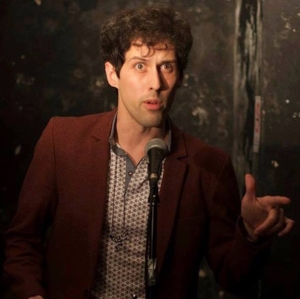 Rob Reeves is a poet and musician who splits his time between Northamptonshire and Leicester. In October 2016, he was commissioned by BBC Local to write a poem for National Poetry Day on a subject connected to Northamptonshire. Focusing on the local shoe industry, Rob wrote ‘To a Shoe’, the resulting video of which has had over 36,000 views on Facebook. Rob started writing poetry in 2012 when he was taking his MA in Modern Literature and Creative Writing at the University of Leicester, where he is now currently taking his PhD in Creative Writing. Rob writes about the important things in life – relationships, drinking, shoes – as well as anything else that takes his fancy. His PhD thesis is a creative work on themes of isolation in the modern world. He tends not to perform these poems though as people are generally out for a good night and he doesn’t want to ruin it.  In 2013, he moved to Paris where he first began performing poetry at SpokenWord Paris. After returning to the UK, he set up his own spoken word and poetry night, Run Your Tongue, which has since seen Attila the Stockbroker, Jonah Matranga, Ash Dickinson, Mark Grist and Jess Green all come through its doors as well as providing a platform for local poets, comedians and musicians. What seems a lifetime ago now, he – along with his band – toured with Napalm Death and Megadeth, played at Reading and Leeds festivals and supported Slayer at Wembley Arena. His music has somewhat mellowed out since then, mainly because it’s just him now and he can’t make as much noise on his own.  His first collection of poetry, Some Poems, is now available through 3P Publishing, and an EP of songs entitled Some Songs will be released in March 2018.