Posted on August 19, 2018 by albertorigettini 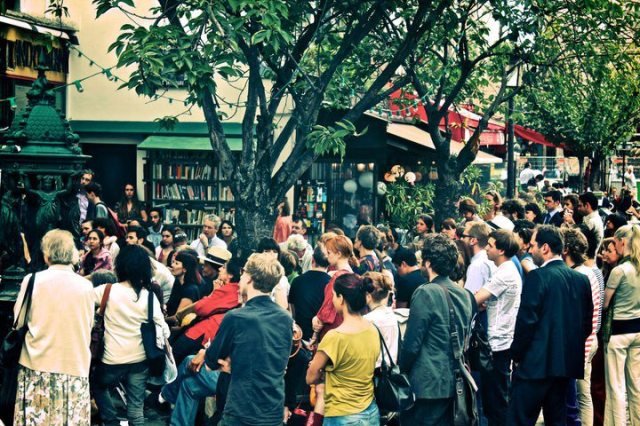 I’m informed by the organizers that after 13 years and 650 sessions, attended by thousands of people, the writing group will come to an end because the new management at Shakespeare & Company decided not continue letting them use the room at the second floor. Apparently all attempts of having a discussion about it, a phone call, a face to face talk, failed. For me and for many others this is shocking news.

I haven’t been to the Other Writers get together in a while. Last time I went it was May. That Sunday I finished working at the Louvre and stayed there longer talking with another tour guide, so I arrived later to the left bank bookshop. When I reached the second floor, the room was half empty and there was no workshop. There were no signs on the wall, nobody told me about the cancellation, I probably didn’t check the news from the mailing list. Well, I had to admit I wasn’t attending it very often lately.

I was tired, I just sat down where I used to sit all these years, on the side of the window, the books’ spine pressing into my back. The fact that the room wasn’t used for the workshop created a strange effect I was about to observe. None of the typical characters I’d regularly see was there, not a tumbleweed, not a backpacker, not a wannabe artist drawing or scribbling on a notebook.

The constant stream of tourists naturally formed a line. They were walking in line like they do inside any attraction in Paris, in line to enter, in line up the staircase, in line crossing this room, reaching the window, turning their back, lifting their phone, taking a selfie, going back to the line, going downstairs in line again and out.

I looked through the windows at Notre Dame’s towers and found myself thinking: this was a privilege we once considered normal. But when? If it was just one week ago, it already seemed another life, just one life among the thousand lives Paris had had. This feeling that this life won’t exist anymore demolished me. Because this wasn’t an ancient monument, like a Cathedral, a Royal Palace, not even an Eiffel Tower. This, believe me, is a real place. 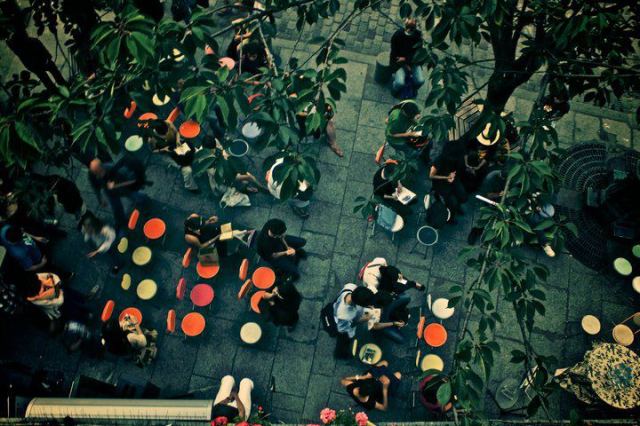 Not long ago you would spend your day, you’d waste your time, you’d mark your corner, you’d talk and argue and you’d sleep, by night but even during the day, with a book on your belly, a cat on your shoulder. You’d bump into your future forever best friends and your forever best enemies. Not everything was always going fine of course. I’m one of those who can say I’ve been literally kicked out, shoe in the ass, by George, but if I said that right now, these literary groupies in front of me would go: “Reeeally??? That’s aaawesome!”

Yet, these who I see entering the room had a mad face. Like somebody on mushrooms without mushrooms. They would waddle through the floors with bulging eyes and the constant wow&awe. Somebody might say that when I arrived here 9 years ago I had the same expression. No. I arrived in this room, shyly, lonely, by myself, shy, lonely, like everybody had arrived, in the same way, from Great Britain, Australia, Lebanon, Sweden, Turkey, America. Shyly confessing I was a reader, I had my heroes in literature, surprisingly discovering that in this city there were other people like me, who claimed they were writers. Writers, that were writing.

And they would meet around these sofas. But these visitors were staring at me, with a mad gaze, smiling at me, as they smile at the Mona Lisa, looking at me, as part of the furnishings, just because I was sitting in the room. Their gaze was piercing me, but they meant no harm, their gaze was just going through me, as a human being I was invisible, I was, I realized, a ghost. I had feelings and a voice that didn’t belong to their world anymore.

Some of them, were acting as tour guides, explaining to their friends: “This is Shakespeare & Company” showing them a photo of Sylvia Beach. Not of Sylvia Beach Whitman, George’s daughter and the bookshop’s actual owner. Where was Sylvia by the way?

Sylvia, since the first time I saw her, with her blue eyes and smiling red lipstick, reminded me of an aerialist, always on the top of the wheeled ladders, flying from one shelf to another. The clients, down to earth, spent time talking to her, looking up to a book butterfly in constant movement. Having spent so much time of her youth there, she knew the place by heart and handled the world literature in her hands. Thanks to her particularly physical relationship with books, her activity looked graceful but authoritative: Dostoevsky, Joyce, Nietzsche were all put back in their places. Where was she by the way? Unaware or resigned? Pregnant of a second kid, with a boyfriend who looked so different from her father?

Sitting in that room that evening I realized how, besides any judgement, the Other Writers’ Group, now called AWOL, as only for existing, had an important function in saving Shakespeare & Co and its history. It was the last barricade, erected by the resistants of what George called an anarchist utopia, arriving from all over the world, just for two hours a week, filling the second floor, occupying every inch of this room, sitting everywhere, even on the floor, using the space for something that looked really intense, damming for a second the persistent river of tourists. And the tourists looked happy anyway, pointing at these weirdos, gathering for real every Sunday evening, another peculiar live attraction of the place.

Why am I surprised by the fact that things can change at some point? One may say it’s the simple course of time and maybe it’s time to leave Paris before dying, instead of becoming, still alive, one of its âmes errantes (errant souls, spirits with no home). We’ll all become ghosts here, from the assistant to the real customer. Like a ghost I walked away. At some point downstairs, I started feeling pushed, as it often happens in the Louvre. They were pushing me forward, I was in the line, pushed straight towards the exit, no risk to buy a book, I got carried away and I was out.

I was giving a final look at the building from outside, ready to leave. And then something happened. A huge group of Asian tourists, I have no element to say where they were from, one of those groups I might have clashed with a few hours before at the Louvre, arrived and took over the little square.

The guide had a microphone and an umbrella or a flag and all of them had headsets. The guide started with saying something funny and everybody was laughing. Then he moved and placed himself with his back at the entrance. He probably explained something about this institution, but briefly. Then he pointed at an old American, sitting on the wooden bench reading a book. The guide flipped a random book from the outdoor shelves and mocking the American, sat next to him and with a stupid face, mimicked what a reader does. Everybody laughed and took pictures of the scene. The American smiled as well, out of kindness, but not able to hide the feeling of a little awkwardness. He didn’t know what was about to happen.

The guide said something else. And from that moment on, each one of them, they were around 40, one buy one, would pick up a book (not buying it, of course), sit next to the American, mocking him, rocking their heads emphatically, pretending to read with a silly face, posing for the pictures. It went on ad libitum.

Sitting on the steps, hunched, with my elbows on my knees, hands under my chin, indifferent as stone as that indifferent gargoyle who looks down to all visitors, I thought: if you don’t want the wannabe writers to be here anymore, these will be the ones you’ll get in exchange. I really hope the new management will change its mind.

Alberto Rigettini, Member and host of SpokenWord Paris, Pimp of the Poetry Brothel in Paris. Fan of Shakespeare & Company and of the AWOL writers group.

3 Responses to Shaking the Company