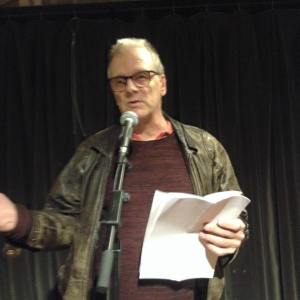 William Walrond Strangmeyer was born in Roanoke, Virginia, and grew up in Brooklyn, New York, and Brofus, New Jersey, where he went to Rutgers University, starting out as a classics major, changing to musicology and finishing​with an abnormal psychology, all of which he declined to follow up or to​ practice. He has worked in many different fields of endeavor, including​ amusement parks, banks, book stores, cinema, door-to-door sales, restaurants,​ retail sales, taxi driving, telephone sales, warehouses, theater and as a tour guide​ and was also co-editor of Upstairs at Duroc, a literary review, blowing his​ chances at working-class hero status. A forty-two-year resident of Paris, he now​ earns his living as an English language trainer and translator.​ He is the author of several volumes of poetry (all slim), his other principal​interests being various forms of boxing, bull fighting and old music. He is​ Archon of Paris for the Moorish Orthodox Church and a member of various​ other organizations embracing a few essential beliefs and having even fewer​ doctrines.​ He has read all over Paris over the years and in NY and Florida.​ His main influences are science fiction, doo-wop music and a mis-spent youth,​along with the usual Eliot, Pound, Wallace Stevens, Poe, Catullus, Larkin, Elroy,​ Doctor Seuss, Beaudelaire and also Emmylou Harris, Roy Jones Jr., Leonard​ Cohen, Feodor Emilianenko, Bartok and Roy Orbison.​ His motto this year is, “Keep a straight face,” but sometimes he forgets.