How’s that for atmosphere – The Highlander, a dark and dungeon-like Scottish pub with a stage at one end and pistols, pikes and swords on the walls. Maxx began, oddly, with Terminus/Closure. Heidi and Travis did a cycle of her poems to the backing of his double bass. Antonia sang and spoke about Heart Shaped Rooms and how everyone in Paris lives on the sixth floor (Sergio – you are missed!) Elena Meister gave us a heartfelt elegie to her grandmother “you see, she IS me” and Maguy told us her dreams. 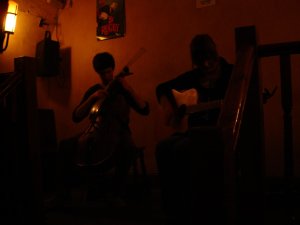 Erica sang, backed by Conrad on cello newly returned from England. We had not 2 but 4 musical acts – the other two being Alixandra & Stefanie, and The Alice Tree thealicetree@yahoo.com who gave us The Lost Poem, Just Be A Man & He’s My Brother among others.
Arlene told us about giving birth to an egg. And Miranda and Neil also read before Maxx gave a reprise of poems by Loury and Joyce.
Finally Alixandra sang on the steps of the stage when we thought it was all over.

Verdict: great night, very atmospheric setting, but expensive beer (6euro80 a pint!) Should we go back? 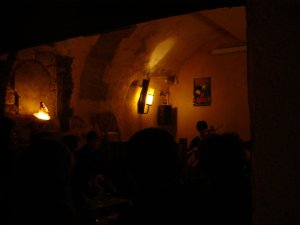