25th November: have you seen this man? 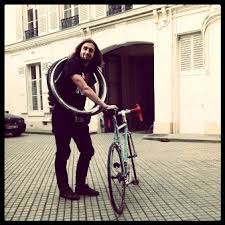 Evan Knight has lived various lives. Professional wrestler, saxophonist, Nebraska poet and bicycle thief. Lately seen hanging around in the cellar of the Chat Noir bar in Paris, where according to one source he “typically reads one poem then buggers off.” Interpol expect to intercept him there on Monday, having lured him with the promise of being featured poet. Be warned – he may have radically changed his appearance since this photo was taken e.g. hairstyle. Police warn that he should not be approached unless actually present.

This entry was posted in Special guests and tagged Evan Knight. Bookmark the permalink.