Our featured guests this Monday  are Carey Downer and Heni Rizk who will be perfoming two Valentine’s stetches for our enjoyment.  The first, ”Déjà Vu” was written by Nick Calder  Bans, and the second, ”To Kiss or Not to Kiss” was written by Carey Downer. 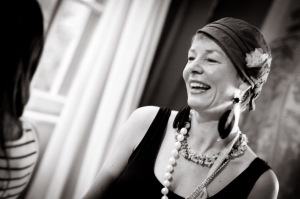 Carey Downer is a British/Canadian actress with a wide range of experience in radio, theatre and music.She has worked with several companies on internal communication projects as a voice over artist for internal videos/ Management interviews and also in general advertising for companies such as l’Oreal and Bull.  She is a founder member of “Break-a-leg”, an English language Theatre Association producing Comedies in Paris by writers such as Willy Russell, Noel Coward and Oscar Wilde. Nowadays, Carey very much enjoys performing and writing comic sketches on stage and in private soirees and writes short stories and plays for children. She is also often involved in staged play readings for “Moving Parts” and “Theatre Metropole”.She is an English Coach in presenting/debating skills for Management in International companies, a voice-over artist and a trained Shiatsu Practitioner 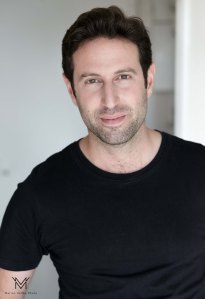 Henri Rizk was trained at the Theatre le Hangar in Toulouse and at a multidisciplinary Drama School in Paris where he had Valérie Antonijevich (creator of the Collectif Maquis’Arts) as a Drama teacher. He still works with her today as an Actor (in addition to English he also speaks French and Italian° and a Director Assistant on several Contemporary writings.Henri loves comedy and, in fact, his first acting experience was in Commedia dell’Arte play, he has also worked in vaudevilles of Labiche, in The Dragon (Evguéni Schwartz) and in some sketches for the screen. He also performs regularly in Theatrical tours in touristic areas of Paris.As well as comedic roles, he also likes performing more dramatic parts, as he did in many short films such as : a maffioso in Family Day (Jean-Charles Charavin), a lonely man in Apparition (Denis Dobrovda) or the desperating Mr Patissot is Sundays of a Parisian Bourgeois (Thomas Grascoeur) based on a novel of Maupassant.His last workshop brought him to London to work on the “Voice and Shakespearean text” with Nadine George (creator of the Voice Studio International)