by David. Photos by Stef, full album here. And hey, if you want to submit to our magazine check out The Bastille.

Gabriel (photo with miner’s lamp) had his hands on various thighs; fixed at this point with a curled lip, while an old man tugged at his laughter lines. J.D., about to go back to the USA for family & health reasons, sang ‘Are you gong away with not a word of farewell? Will there be not a trace left behind?’ Charles recited Shel Silverstein’s Man Who Got No Sign from memory:

Look out, Momma, he’s headin’ this way,
One eye yella and the other one gray,
Lookin’ for a soul, but he won’t get mine.
He’s the man who got no sign.
Well he blew right in, sat right down
And rolled himself a righteous smoke.
He lit his roach with a lightnin’ bolt,
He took a toke and spoke.
Said he was born in an astrological warp
When the moon refused to shine
On the cusp of nowhere and nevermore.
He’s the man who got no sign.

There wasn’t much Dr Seuss as it turned out, but I did Oh the thinks you can think and Melinda’s I do not want to play this game was inspired by Green Eggs and Ham. David Sirois did impressions of Paris. From impression no.53:

Smoking salesmen on the impatient sidewalk
There are no dogs…
…only traces of them.

Round 2 – Amel sang ‘Give a Man a Home.’ Callum did Monty Python’s ‘I like Traffic Lights.’ Kirsten was not waving but drowning c/o Stevie Smith. Sam lost his footing, wrote in the heart. The door was painted shut. Lizzie brought a poem from an old book. Bruce brought hymns sung from the back of greasy menus. Yann Icus read 3 great poems, one I leave you with here and another can be found on his blog.

When I was 13 I decided to jump a freight train
after running away from home. I watched
my father shout my name leaning out the front
door, a letter crumpled in his dangling hand.
A letter of adieu, in dramatic cursive, my vengeful
farewell. Exeunt, stomping feet.
Ink bruised my palm from all that sweaty rewriting,
whittling those words to needle point, to cut deep.
I watched the sprinkler on our manicured lawn.
Watched the clockwork of grass growing, the grownups
staring from the porch like sailors on a deck.
Still, the roiling Ocean was too far.
There were no train lines to jump, no roads to Kerouac.
No-one trusts hitchhikers anymore.
Bukowski lied. He never even saw
the inside of a boxcar.
I stole food from my own kitchen, clean socks
from my own bedroom, and slept in the shed
with all the power tools and wood chips.
Father knew the whole time, he told me, years later,
with a gruff chuckle. Thought it was best
I ride this out.

SpokenWord is back Monday Jan 14th with the theme “Teenage Poetry” – bring what you will, your own or by others… the worse the better! Stuff off-theme also welcome. And we have a Featured Reader –

He was nominated for the Puschcart Prize, 2008. 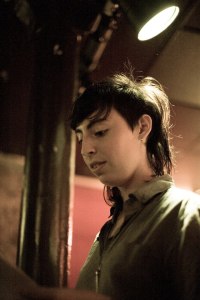 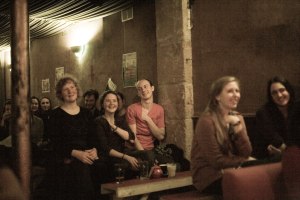 1 Response to Report from 7th Jan: Dr Seuss at SpokenWord