Is death like passing through business class on the way out of a plane looking for something to steal? asked Cralan – featured poet down from Amsterdam, a high-energy Robinson Crusoe.

Sophia’s very existence was the result of a catalogue of consequences that took in affairs, the creation of Israel, an Egyptian biologist and World War Two. Thomas emailed his poems by mistake to the Head of Climate Change Finance at the New Zealand Ministry of Foreign Affairs. Melinda was menaced by the Grand Dame of Monoprix. Francesca clashed teeth. Hanniffa misses her lover, the Sun.

Kristina almost went to Stockholm. For Alberto, Paris glistens in the Sun, and this is as unexpected as the smile of a French woman. (There may be consequences for Alberto when more French women hear he said this; possibly a poem about Italian men.) Gabriel told us all about his Great Aunt Selma and explained his complicated family history. For David Sirois there were consequences to being born. For Rebecca there were consequences to her boyfriend being seduced in a shopping trolley by Somebody Else.

Devon slammed Robert Frost – something I’d never seen before; worked rather well actually. An exploding star cast a speck of cosmic dust in Evan’s eye. Pahlavi doesn’t think about the consequences. Charlies roasted his father’s heart, in akind of Norse myht from Birmingham. Liz is the no-toenail poet. Anass brought poetry in Arabic. Brynn found a box of mouldy Harlequin romances in an abandoned train station in Canada.  And Megan? Your problem, her father said, is that you think like a man but have all the desires of a woman. 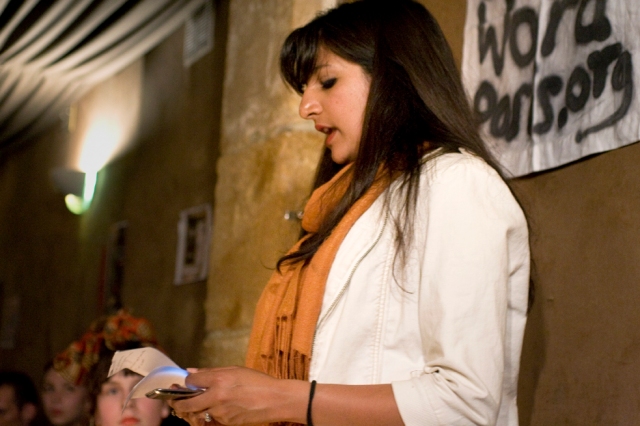 So. Much to chew on between now and the next SpokenWord – Monday 22nd April at the Black Cat. Hosted by Alberto unless he is busy becoming a father. Theme STRANGE and we have a Québécois spoken word duo called Boutefeu as featured performers. Sign up from 7.30pm, poetics start underground at 8.30.

Thanks to Sabina for the photos.
Cheers all,